A note on the Panama Papers


Mossack Fonseca is apparently the fourth biggest provider of offshore services. Which means there are 3 others that are bigger and probably handle even more high profiled folks. It doesn’t take a genius to figure out who those people might be. Folks at the highest level of economic and political power don’t get to those places without gaming the system. There are plenty of people who “work hard” but those people will never be part of this club. If the Panama Papers account for $32 trillion (!!!), what do you think the 3 others account for?

It isn’t by accident that 85 people own the wealth of half the world’s population. It is by design. It is through laws passed by those who apparently represent us that allow people to get away with this kind of robbery. There might be outrage that this is robbery via tax avoidance. We might think we are being deprived of essential services from the government because of their actions but it actually goes deeper than that. The artificially set minimum wage, the artificial fight for health benefits, the artificial fight for better wages for our teachers and our nurses – this is all created by this incredible wealth horde. It turns out that not only can some corporations and individuals afford to pay a living wage, they can afford much more than that.

Perhaps the minimum wage (everywhere) should be pegged to profits of a corporation so we do not harm small business because right now these corporations are taking advantage of these arbitrary laws to massively redistribute wealth from the middle class to the rich. This is not – annual income of $250,000 rich, this is mega rich. Effectively most of the world is in slavery – forced to work for low wages, no benefits, no holidays, no education because apparently companies cannot afford to pay them. 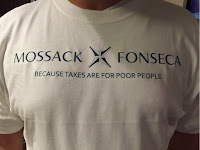 Don’t forget that by spending up to 90% of our income on goods and services, we are enabling these people to hoard incredible amounts of wealth. Those born into this wealth will never have to work as hard as we do and we will forever be chastised for not working hard enough and for being jealous and envious.

The Global Financial Crisis was and is continued to be used as a crutch to deprive us from access to education, health services, a fairer justice system, housing for the poor, mental health services, wages for teachers and nurses, action on climate change, prevention of environmental degradation, services for people with disabilities and chronic illness, science and technology research, arts and culture funding, dangerous working conditions all around the world, paid leave for parents, holidays for workers – the list goes on! “Austerity!” they say. What an incredible lie it all is.
Posted by Lamia at 5:00 PM