Sunday feature: What is actually going on with Serco?

First there was the “fight club” allegations –
Private prison company Serco has admitted it received reports of organised "fight clubs" in its prisons two months ago but will only investigate now, after fight footage was shot and shared online.
Then Labour’s Kelvin Davis brought into light an “initiation ritual” at the Mt Eden prison called “dropping”. Apparently prisoners are thrown over a balcony as part of the initiation. This may have even led to a person’s death in the Serco-run prison which was kept quiet until now and has been dismissed as well.

Corrections boss says prisoner fell off balcony after being chased and assaulted by another inmate, was not "dropped".
— Aimee Gulliver (@aimeegulliver) July 22, 2015

We may never know what actually happened to the prisoner in Mt Eden because it has turned into a case of "maybe" or "maybe not" and "allegations" not "facts".

Last year Fairfax ran a story of an ex-prisoner describing his life behind bars at Serco-run Mt Eden. The description is fairly horrific and of course dismissed by officials. The prisoner spoke of being deprived of basic necessities such as toilet paper and how the prisoners threatened to riot. Back in 2011, there was another story about how Serco was accused of “bribing inmates with bigger helpings and food and television in their cells to encourage them to behave”. They probably weren’t getting strawberry shortcake or whatever stock photo Herald decided to use and dessert really isn’t the issue here. This accusation came from the prison officers’ union known as the Corrections Association who also suggested that this “allowed the private prison operator to get by with a skeleton crew but guards were feeling vulnerable and leaving on a daily basis”.

It makes one wonder what kind of due diligence the government actually did before awarding the contract. Early this year there was a Financial Times article featuring a former Serco executive Richard Johnson who said Serco tries to win contracts at any costs and because they are aware that governments usually award the contract to the cheapest bidder, they will spend the money upfront to get the contract and then cut corners later to make it the cheapest bid. He added - "The trouble with poor outsourcing contracts is that “no one wins in the end — not the government, not the contractor..." New figures released this week shows that Mt Eden priosn run by Serco has the most inmate assaults in New Zealand. We certainly aren't winning. The idea behind contracting out public services is that the private sector will bring innovations to the public sector. And while the majority of New Zealanders might not care about what happens to prisoners, what Serco is doing isn’t innovation. It is mostly about cutting costs and making a profit which is unsurprising. There's a difference between working profits and working within a budget which what governments do. Comparing government to industry is basically like comparing apples and snakes. Yes, I said snakes because at least apples and oranges are both fruits. Privatization is usually about transferring public wealth to private profits and it is usually driven by "knowing the price of everything and the value of nothing" in the words of Oscar Wilde.

This isn't the first time this has happened in New Zealand and New Zealand isn't the only place either. The previous National govt also allowed Mt. Eden to be run by the private sector, but that contract was canned by Labour and Alliance in 2005. I'm not suggesting that privatization is the sole problem either. The problem is even if the prison system wasn't privatized our Ministers probably wouldn't take responsibility. They would say it's an operational matter.

Meanwhile a prisoner custody officer died after being beaten by a prisoner in a Serco run prison in the UK earlier this month. In Australia, the Fiona Stanley Hospital review blasted its Serco contract. And school staff in Lincolnshire are "still not being paid" despite Serco and county council's assurances. These stories are all from this year and doesn't in anyway represent the magnitude of Serco's problems. But back to New Zealand. There’s absolutely no doubt that Serco has been in breach of contract. For instance see below from the contract and how much a prisoner's death is wroth in our society. 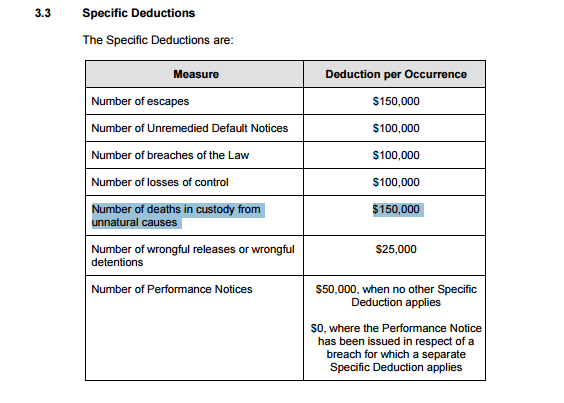 This explains the fact Minister Tolley initially was fairly dismissive of about prisoner safety calling them “bad people”. Mt Eden is a remand prison and she was deliberately ignoring the fact that these people haven’t been found guilty in a court of law. While it might not be unusual for there to be violence in prisons, it shouldn't be accepted. And breaking the law doesn't make people "bad". That kind of primitive thinking is what leads to an ineffective justice system but perhaps that is for another blog.


Over the weekend there were multiple stories with various titles suggesting that the Government was taking over Mt Eden prison following the accusations. This is extremely misleading because the government isn’t actually taking over but merely bringing in “upto 20 people to oversee the day-to-day running of the jail for the immediate future”. It is misleading because the contract hasn’t been terminated.

As Max Harris rightly says, Serco’s contract with the government does allow that. And further to that:


No need for Performance Notice for material breach. Could be breach of cl 8.1: req to perform services "with due care, skill, and diligence"
— Max Harris (@mdnharris) July 24, 2015


And it seems the Serco and the Minister have very different ideas of what is actually happening. Again Max Harris points out:


Serco has been fined $300,000 in the past and we still don’t know what it was about. The lack of transparency which has been a hallmark of this government now extends to those we contract out to as well. Serco’s 10 year contract is valued at around $300million AUD and it's overall revenue globally is around $9billion NZD, so these fines may seem substantial but there is no doubt they will do everything they can to recoup those costs and it will at the expense of prisoners who aren’t seen as humans deserving dignity already by this government.

On Saturday, TV3 ran a story whose headline was Government still a fan of private prisons. With the Sky City debacle, Charter school problems, talk of further privatizations of housing and other social services, this should be a huge concern. But this is a central ideological position of the right. They can’t afford to be failure with Serco because this has the possibility to undermine the entire government agenda.