This post will serve as a rolling post where I aggregate stories about child poverty to show how incredibly harmful our economic policies are.

According to a new UNICEF report released, "New Zealand is in the bottom third for inequalities in education". While this government continues to keep saying they cannot measure poverty, the rest of the world is condemning us for being at the bottom of the heap.

The framing of child poverty is about failed parents and adults. Yet, child poverty has an impact on education and health thus condemning this kids to a lifetime of poverty. And these very same kids will be chastised as adults for being poor even though that is effectively the life sentencing we are giving them.


Universal Basic Income is something that has been discussed recently which may go some way to addressing child poverty but solving income inequality on its own is not enough. Poverty is a multi-pronged policy failure and unless it is considered in the context of government services, wealth inequality, labour rights, taxation of corporate profits, concentrated inherited wealth, and our values, we cannot solve this grave economic problem.


Today the Children's Commissioner and the Salvation Army have had exposed how lack of government action has lead to a worsening situation.

"Children's Commissioner Dr Russell Wills has described the Residential Tenancies Amendment Bill as a wasted opportunity which will not improve the often-appalling conditions in which children live."

This government has a habit of implementing policies that are not designed to be effective and then blaming 'government' as the reason why they were not effective. This then serves as an excuse for privatization or complete inaction. Add to this, now they are are being accused of cooking the numbers to make them look good. Somehow I'm not surprised that Government agencies might be creating fake targets to give the appearance of "success" since this Government brought in their Better Public Service targets.

These targets are meaningless without a whole of government approach to meeting the needs of our society. If agencies are more worried about looking good to the government of the day, they are not going to be spending time coming up with policy solutions to solve the problems that the public faces. The government's own Ministerial Committee on Poverty continues to achieve nothing.

This is an appalling statistic and our entire nation should hang its head in shame. Housing should be a key social policy and a key priority for this government if they want to actually tackle child poverty. Unfortunately I don't think tackling child poverty is the legacy John Key is after.

According to the OECD:

Poor children in New Zealand are more than six times more likely to do badly at maths than well-off children, a new report from the OECD says.

This was reported by RNZ 2 days ago. Last year when he was questioned about uni students in hardship he said - "They can get a student loan with no interest, they can get a student allowance they never have to repay. There's lots of entitlements that they get that better-off kids don't get."

Labour has announced a policy of free tertiary education which has the potential to help many in hardship but if childhood poverty and hardship prevents kids from getting a solid education, university will be very challenging and unproductive. We would be basically setting up these kids to fail.

While the National Party is seen as good economic managers in the short term, this spells disaster for the future on New Zealand. We have a situation where 1 in 3 Kiwi kids are growing up in poverty. A third of an entire generation of children are going to enter the workforce at some stage in the future with inadequate skills. The fact that National are putting winning elections ahead of their responsibility to govern is predictable. No amount of trade agreements will solve the hole that child poverty will leave in our future books.

Today we have a story on RNZ headlined: “Child poverty 'moral crisis' for New Zealand”. While the headline focuses on 'moral crisis', the person they were quoting - Dame Diane Robertson, who is the outgoing head of the Auckland City Mission, said: "It's an economic crisis, it's a social crisis and it's a moral crisis."

It is an economic crisis.

In 2008, academics writing in the Journal of Children and Poverty[i] said, “apart from considerations of equity and justice, it may be in the nation’s material self-interest to reduce poverty.” My perception of the issue is that the moral argument is failing. There seems to be very little appetite for equity and justice for roughly 50% of the voting public. And this is reflected in what we believe are the “real issues”. Personally, I do not think National voters or even right wing voters are ‘evil’ and I think that they do care about child poverty. But their preferred solution is not working. We know it is not working because their preferred government has been in power and child poverty is rising.

Prime Minister John Key tried to deflect the issue by linking child poverty to drug use. It is clever but if it indeed is drug use (which it is not), then it is also a government failure in its inability to treat addiction as a public health issue. In fact, this government implemented a drug testing policy for beneficiaries which has largely been a failure. There were 47 positives from about 30,000 tests - a huge waste of resources on an ideologically bigoted witch-hunt. Despite the deflection, the facts provided by his own Children’s Commissioner is that children are living hardship whether their parents are on the benefit or in work. 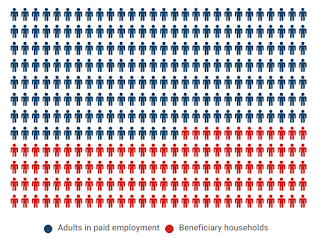 The facts are that working parents are not making enough and their children are in poverty. This is a travesty. To add to all of that, 31,000 people had their benefits cut because of not disclosing foreign trips in the last financial year. No doubt there were children living in those households. National raised benefits by $25/week and then dropped 31,000 people (!) from it. It seems that the attack on beneficiaries is slightly more sophisticated now compared to the 90s. Their social and economic policy is such a massive failure that it does not matter whether people are on the benefit or working.

No matter how anyone looks at it, 300,000+ children living in poverty is disastrous for our economy. And so I am going to subvert the spirit of Christmas and say that this economic failure is going to personally disastrous for me. I am going to be selfish. Child poverty is not in my 'material self-interest'. After the current home-owning wealthy baby-boomers are long gone, I will be in my 60s and these kids are going to be in their peak working age. The statistical association between them and their likelihood of having lower earnings, being less productive, being more likely to commit crime, and having poor health is high. That is a fact. Not only will they not be contributing to my society, I will be bearing the economic cost in the form of rising public health costs and an expensive justice system.

If we are in fact going to be discussing morality, I would rather my tax dollars go towards the well-being of a child rather than housing an adult in prison. A latter position is unarguably immoral. Letting ideology get in the way of dealing with child poverty because one might have to be slightly socialist in the short term seems like a small price to pay. Yet I do not feel that argument has been made by the Opposition at all. A larger participating workforce can only be good for our economy. It means more goods and services being bought (yay Capitalism!).

Child poverty is an economic issue and as such it is an economic failure. According to the Children’s Commissioner, child poverty costs us somewhere around $8 billion a year[ii]. To be absolutely precise, this is an economic management failure. Whether RNZ wants to call the government out via their headline is an editorial decision and the motivations behind their headline choice is not known to me. Perhaps in the spirit of Christmas it makes more sense to appeal to our moral obligations. But plainly put, this is an economic management failure. And as such, I will put the blame squarely at this Government’s feet.

National has been far more successful in its messaging on almost all of the issues. Our political discourse is now much more cynical. We look at how something (whether policy or action) will play with the public rather than the merits of that something. And if that really is the case, I think it is time we start talking about child poverty in economic terms rather than moral terms. Because I think this government has lost its moral compass and as such cannot provide leadership on that. And in the absence of leadership, I do not think appealing to moral conscious is working. I do not know if it is the GFC or years of neo-liberal economic policy that has hardened us, but I feel our empathy levels are very much exaggerated. Yes, during times of national crisis we are really good at coming together but that is not just a Kiwi thing. That is a human thing. All countries do it. Underlying our sporadic empathy burst however, is a lot of apathy, distrust of poor people, bigotry, and selfishness. But if I am wrong, how is 300,000 children in poverty not a national crisis? How is fixing it not our #1 priority? How can we be so heartless?

Merry Christmas and thanks for reading.